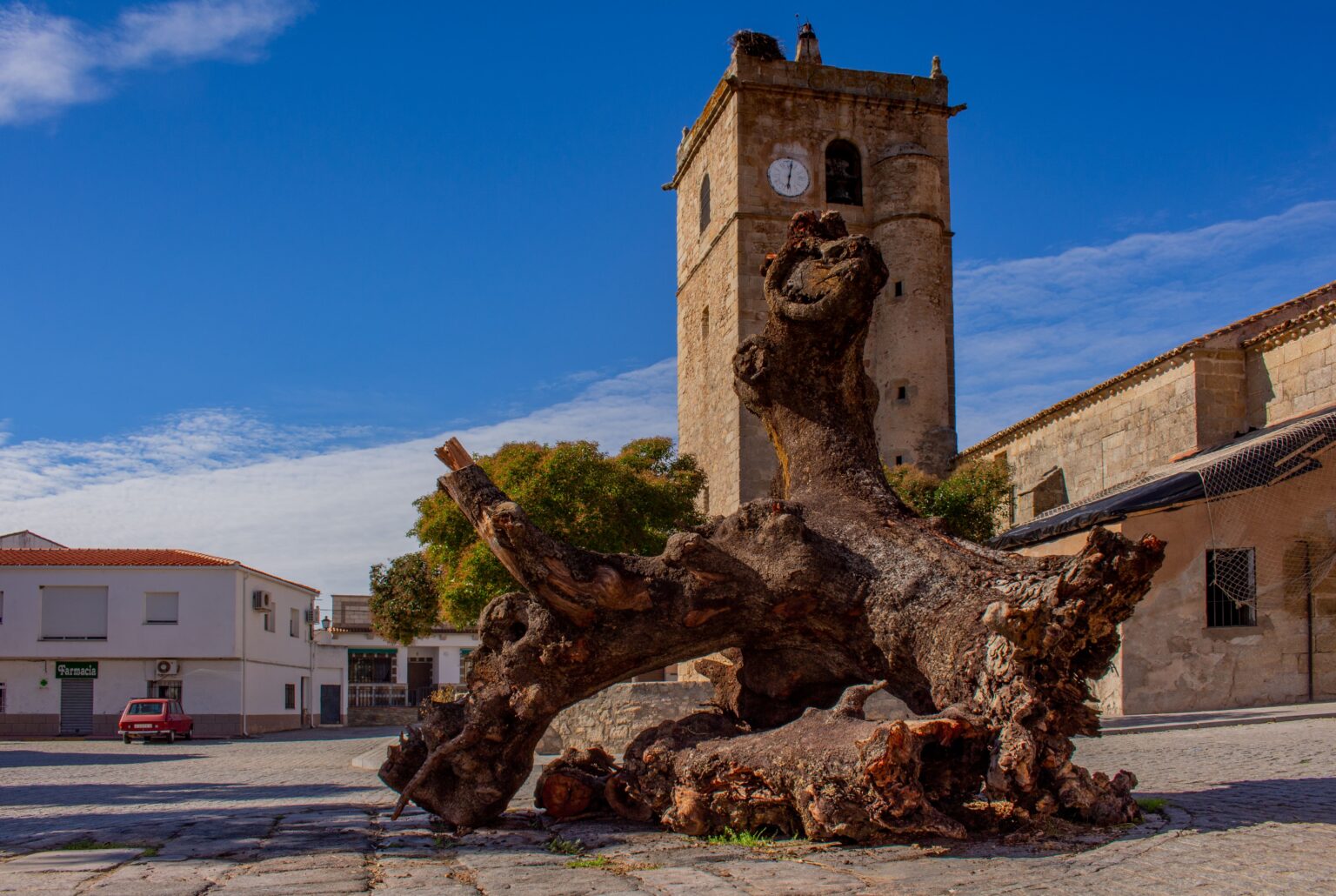 Brought and burned the Tuero

The celebrations of events show the way of life, the culture and the way of communication of our peoples. A moment for the meeting between friends and family, to celebrate our passage through this land, being hosts of curious people fascinated by knowing traditions of our ways of life.
Moments to share weeping sorrows and celebrating joys. 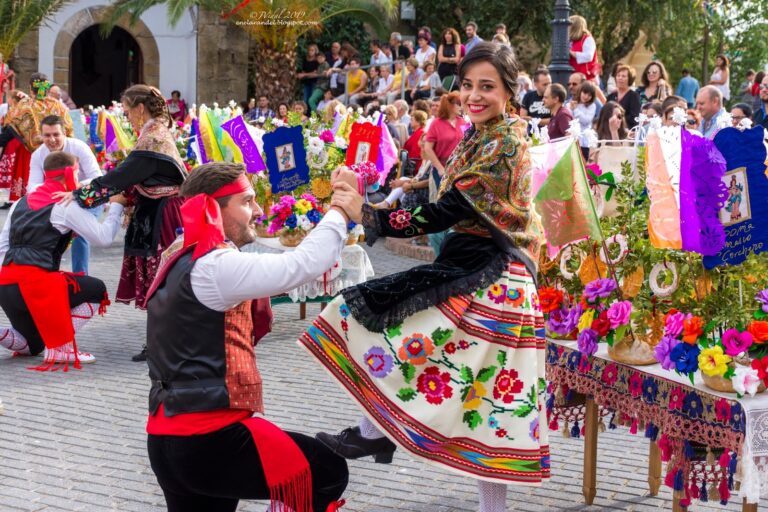 Normally, they are unmarried young women, although in their absence, there have been years in which they have been married or girls between the ages of ten and twelve. All of them are godmothers and boards of San Mateo and formerly the godmothers were the ones who made all the boards. Now every young woman, single or married, takes care of her own. The godmothers wear embroidered shawls, Manila shawls or scarves, black apron and a knee on the head made of ribbons. Once the boards have been chosen, each one has to look for their dancer and also have the dance guides, drum and flute, who are the ones who will give the tone, sense and direction to the dances of «Chicurrichi», starting to rehearse almost a month in advance.

Gambling and betting held from September 15 to the first Sunday in October. It is played in a cement rectangle. It is played with eight small steel balls. A gambler throws the balls, but first must match the bets of those who do it from outside, if there are even balls in the hole and incision wins the gambler who threw the balls, if there are odd balls win the gamblers from outside and enter another player inside. 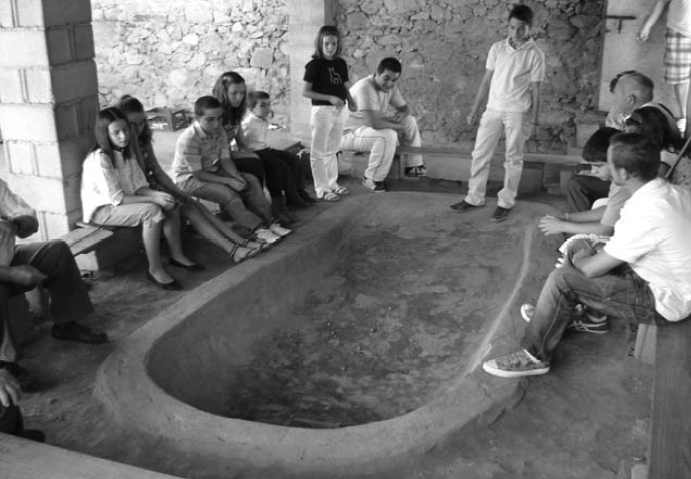 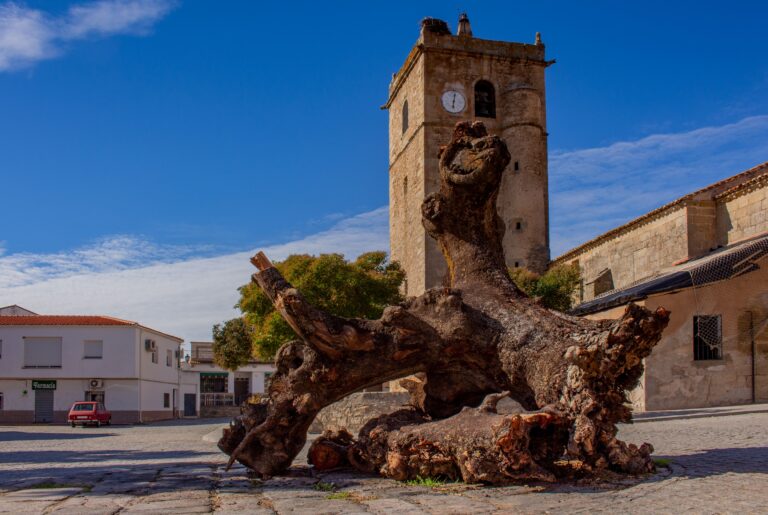 Brought and burned the Tuero

Tradition with different components where the “quintos” (young people of the same age who go to adulthood in the village under this ritual, formerly were those who were to be incorporated into the military service) must choose an oak tree or stump of considerable dimensions. Take him and lay him in the town square on August 15 and burn him on Christmas Eve, having previously covered him with pruning remains, where all the inhabitants gather to warm themselves and sing to him. This was considered a considerable feat when getting the stump or holm oak by cutting and removing manually by the fifth carrying them with mules to the village from their place of origin. It is now urged to choose dried, dead or practically dead holm oaks to avoid the loss of these valuable specimens.

This festival has its origins in the time of the Arab occupation of the Iberian Peninsula in the year 1234 approximately and which commemorates the battle that was fought in the Sierra de San Cristóbal between the Arabs and Christians who lived in that place. The battle ended with the victory of the Christians, so they were rewarded with goat bread and cheese. Among the activities included in its program are the hiking route through the Sierra de San Cristóbal, guided tourist visits, free tapas tastings of the Arabic and Christian cookbook, gastronomic workshops. Of note is the traditional free tasting of bread, cheese and wine for all attendees in the town square, recreating the one made in the twelfth century on the occasion of the victory in the aforementioned battle. The most popular moment is the Tabúa (seed of the enea), which once matured crumbles and is thrown among the zarceños in a sign of congratulations for the great victory achieved, turning the streets of Zarza de Montánchez into a great white mantle. 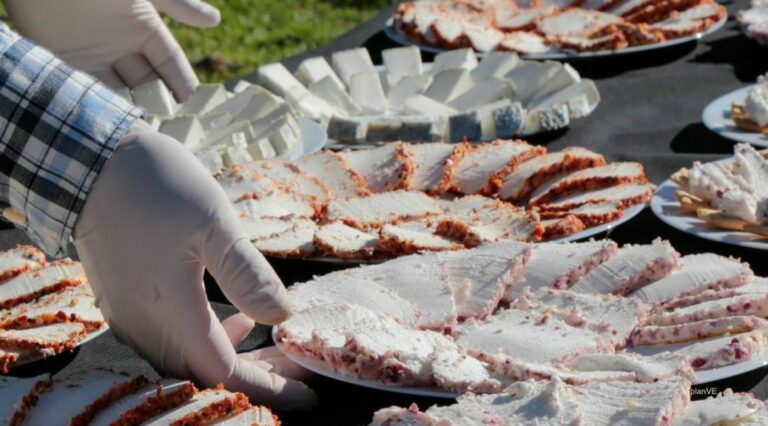 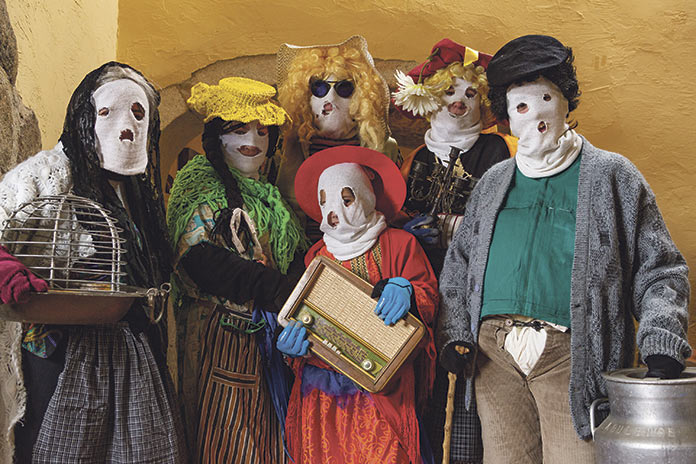 The most famous carnival of the region is that of the Jurramachos. It consists of dressing up in old and unused clothes, the participants cover their faces, simulating other voices to avoid being recognized. Changing walks and postures. All this from the improvisation and characterization, even using the sheaths of the hams very appealed in the municipality. In an atmosphere of revelry you should try to recognize your neighbors and loved ones, while the city council grants recognition to the Jurramacho Mayor and within the small the Juarramachino Mayor.

Cattle fair that was established in 1737, begins on March 25 and lasts until the last day of the month. This fair was of great importance until the 1980s, due to the low use of cattle mule and horse. But it had a great importance in the life of the community because of the great enrichment that all the groups that came to the fair contributed, especially the group of gypsies with their donkeys, horses, music and traditions. An attempt is currently being made by the City Council to recover the fair, as it ceased to be held for several years. 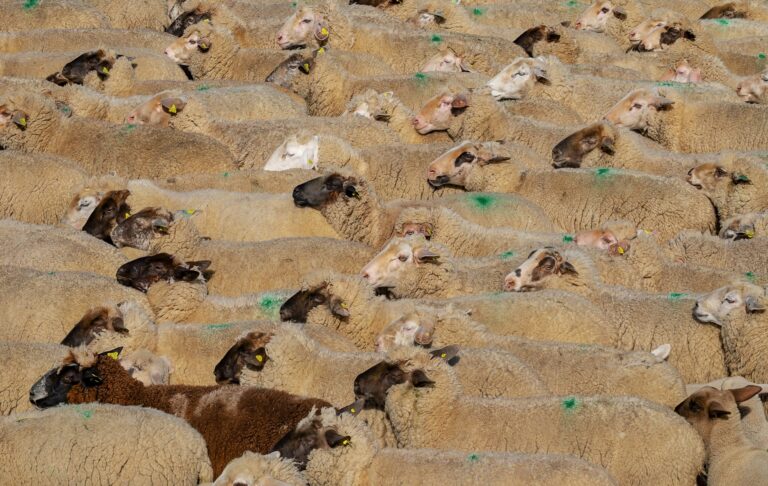 The Extremadura cuisine, famous for its generosity and its deep and particular flavors, makes the visitor feel the affection of the care of a grandmother. Locals worried about filling the stomach of travelers who walk their paths with joy. To compensate with sleeves the effort of an arduous day of work in the field.
A culinary tribute to the land that offers so many different ingredients with which to make world-famous delicacies. 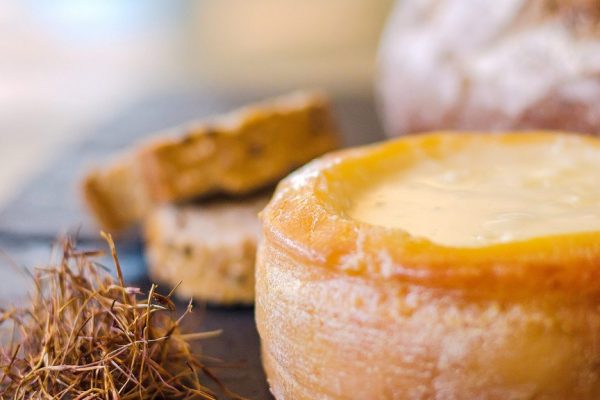 The name “Torta del Casar” is the union of two terms that are inseparably linked in this unique and extraordinary cheese. The first refers to its shape. This arose by chance, as the shepherds who made this cheese in the past with the milk from the sheep they were taking care of, saw how sometimes the inside of the cheese did not harden, remaining in semi-liquid form, and as the cheese could not support its own weight, it collapsed into the shape we all know today. When this happened, the shepherds said it became “atortado” as it reminded them more of disk-shaped flour cakes (tortas) than traditional cheeses.

“Torta del Casar” is an absolutely natural cheese, made with traditional techniques from raw sheep’s milk from controlled farms, vegetable rennet and salt. Matured for more than sixty days.

With a light and thin semi-hard rind, the cheese’s main feature is its very creamy texture, which at certain times makes the body, of white to yellowish colour, pour out from any crack in the rind. With a characteristic aroma and intense and well-developed taste, it dissolves on the palate and is very slightly salty and a little bitter, due to the vegetable rennet used. Read more 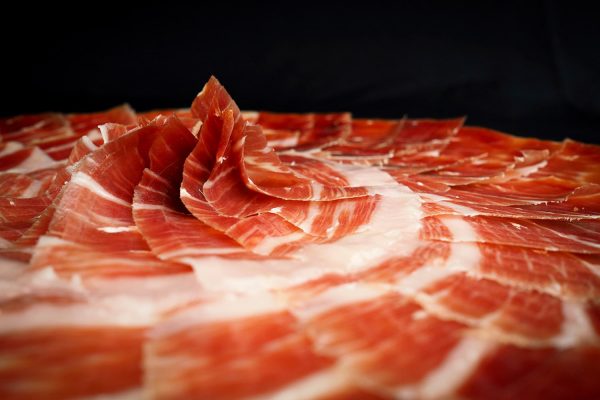 The Sierra de Montánchez, one of the best regions where hams from Extremadura are produced, has large stretches of pasture ideal for the breeding and montanera of high quality Iberian pigs. This is due to the large production of acorns from these pastures, which is not surprising, given the extensive tradition of Montánchez in this pig sector, with its hams of Montánchez, being documented already in the Fueros de Montánchez of 1236.

It has not been by chance that this region has developed its industry around the Iberian acorn ham, with a good number of producers and manufacturers. This region has a very favourable climate for curing of the hind legs, with cold, dry winters and high temperatures in summer that make the ham sweat and help its natural drying and the penetration of the fat throughout the muscle mass.
These are some of the reasons why many of its hams are certified under the Protected Designation of Origin “Dehesa de Extremadura”. 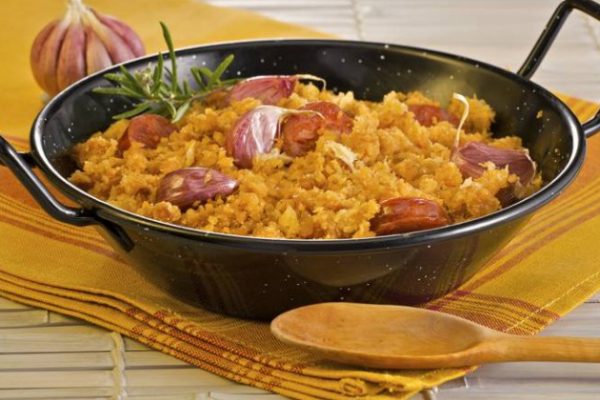 The history of migas goes back The tradition comes from when the shepherds went to graze their goats and their sheep and stayed to sleep in the mountains, in the majas. They did not always have fresh bread, since they only kneaded once a week and to take advantage of the hard bread, in the cauldron, they made the migas.
The goatherds sat around the fire, when the crumbs were ready, in a circle and spoonfuls ate them directly from the pan. 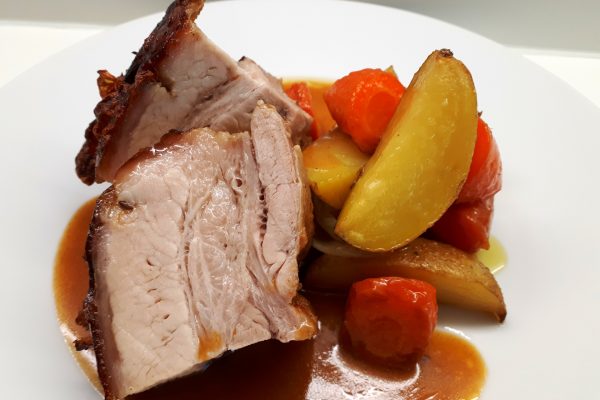 The roasted suckling pig, which, together with the roasted lamb, has been part of the Castilian cuisine since the invasion of the Roman Empire in the lands of Hispania.
There are no known recipes and descriptions of this preparation before the Celtiberians. In the 17th century it became popular in the taverns and figons of the Castilian area and was gradually offered to travellers on their way to the Court. In the region you can enjoy this typical dish in places already consecrated in the making of this delicious meat